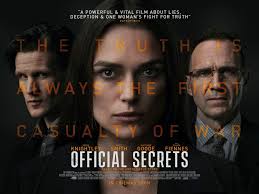 Recently, we have been to Cityscreen Cinema in York to watch either films noir or New York Opera Co. live on satellite transmission. Yesterday we attended to watch a film on current release, "Official Secrets", and we are very pleased we did. It is based on a true whistle blower story, just before the second Iraq War, an employee at GCHQ leaked a copy of a top secret instruction to The Observer newspaper. The story was well written. The director kept the film at a fine pace and made good use of atmospherics. Best of all was the acting, Keira Knightly put in the best performance I have seen from her, nicely played, very balanced and very mature. She was ably supported by Matt Smith and Ralph Fiennes. To top it off, some beautiful filming out in the Cotswolds.
Posted by Pierre le Poilu at 15:33